The Frank W. Cyr Center A Tribute to Our Former Home

Please Note: On March 25, 2014 the beloved Cyr Center was destroyed by fire in just a matter of hours. It is still hard to believe that it is no longer there standing proudly as a symbol of Stamford. This is a huge tragedy and a great loss for our community.

Friends of Music held its concerts at the Frank W. Cyr Center from approximately 1986 through December, 2013. The performances were presented in what was the ballroom in the building’s previous existence as the Rexmere Hotel. The Rexmere was a resort destination for summer-weary residents of means — mostly from New York City — in the glory years of the Catskills, before the advent of air conditioning. When the transition was made from Hotel to Office Building and Community Center is not known, but likely as the number of visitors dwindled the Hotel probably closed and the building fell into disuse.

Frank Cyr was originally from Nebraska and made his career as an educator, with a special interest in rural education. He is best known as the advocate for painting school buses what is now the familiar bright yellow color, making them hard to miss and thereby reducing accidents and injuries. He moved to New York City when he taught at the Columbia Teacher’s College, and retired to the Catskills in 1965. We do not know exactly how he ended up in Stamford, though it is a lovely place with interesting homes which are appealing even today and that alone may have been enough to bring him here.

Mr. Cyr was apparently one of the founders of BOCES (Board of Cooperative Educational Services) which continues to facilitate the sharing of resources among public schools. Our guess is that when the Hotel closed and the building was falling into disrepair, perhaps Mr. Cyr spearheaded a drive to save the building and either donated the money needed or acted in a major way as a fundraiser for the effort. In any case the building was renamed in his honor and it makes sense that Delaware County BOCES had offices in the building for some time. It served this community well for these many decades and it will be missed by all those whose lives passed through the place both in its days as a hotel and its days as a business and community center. 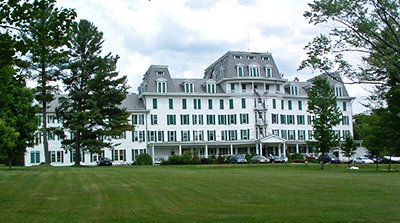 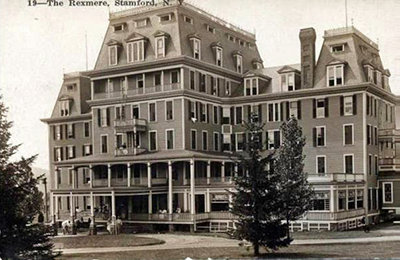 The Rexmere Hotel as seen in a vintage postcard;
date and source unknown.