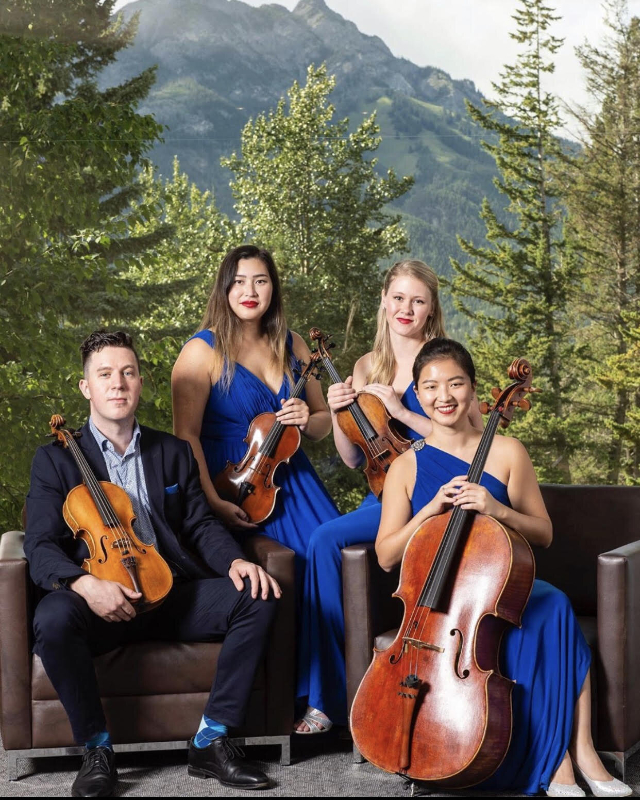 Bill Snyder of WSKG interviewed the quartet in advance of this show: Listen Here!

The Ulysses String Quartet has been praised for their “textural versatility,” “grave beauty” and “the kind of chemistry many quartets long for, but rarely achieve” (The Strad), as well as their “avid enthusiasm … [with] chops to back up their passion” (San Diego Story), “delivered with a blend of exuberance and polished artistry” (The Buffalo News).

In fall 2019, the Ulysses Quartet were named as Lisa Arnhold Fellows of the Juilliard School, an appointment that has been extended through May 2022.

As live music begins to return, the quartet’s upcoming schedule will include an appearance with the acclaimed Emerson Quartet as part of the Naumburg Orchestral Concerts, as well as performances for Virtuosi Concerts and Death by Classical in New York City, Westchester Chamber Music Society, Syracuse Friends of Chamber Music, Dumbarton Concerts, Kelowna Community Concert Association, Elon University, Chamber Music Wilmington, and the American Music Festival. In December 2021, Ulysses will embark on a tour of Spain, including performances in Bilbao, Salamanca, and at the Picasso Museum in Málaga.

Ulysses has recently completed work on their debut album, to be released later this year, and four more albums are forthcoming in the near future, including collaborations with flutist Ransom Wilson and guitarist Ben Verdery, as well as albums of quartet works. As a special project, the group will record the quartets of composer Joseph Summer at Mechanics Hall in Worcester, Massachusetts, over the next several years.

The group’s name pays homage to Homer’s hero Odysseus and his 10-year voyage home. Additionally, the quartet’s members live in close proximity to the resting place of former U.S. President Ulysses S. Grant in Upper Manhattan. The Ulysses String Quartet believes intensely in the power of music to inspire, enlighten and bring people together. The quartet is committed to sharing this passion by increasing access to and appreciation for classical music while enhancing audience engagement. To this end, the quartet offers interactive programs and workshops for all ages that serve to demystify the traditional repertoire while introducing audiences to exciting new works. Their programs frequently enable participants to learn about the inner workings of a string quartet and to explore the connections between classical music and our world today.

The members of Ulysses hold degrees from the Juilliard School, Manhattan School of Music, New England Conservatory and Yale University. The musicians perform on instruments and bows graciously on loan from the Juilliard School, the Canada Council for the Arts’ Musical Instrument Bank and the Maestro Foundation. Ulysses is grateful for the support of Shar Music and Connolly Music.